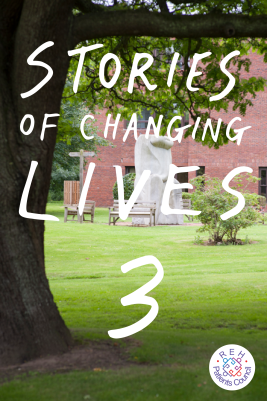 From January to October 2017, I delivered the Stories of Changing Lives 3 project, for the Patients Council – a collective advocacy organisation who do amazing work to represent people who are or have been patients at the Royal Edinburgh Hospital. (The hospital provides acute psychiatric and mental health services.)

This is the third volume in a series (the first two were, incredibly, produced entirely by volunteers). The book is a platform for people to tell the stories of their experiences in and out of hospital – through writing, poetry, artwork, and photography. It aims to be a source of support and solidarity for those who are on similar journeys, and a resource for professionals, family, friends, and anyone who want to understand mental ill health better. It’s also full of creative talent in its own right.

To go alongside the book, we also produced a film. It was great to be able use a range of media – the project feels really multi-faceted, and it meant that people could get involved however they prefer to express themselves.

I ran workshops, worked one to one with contributors, and co-ordinated work with photographer Margaret Drysdale, film-maker Peter Ross, CAPS, and Artlink.

We launched the book and film twice – with a preview at The Hive on the hospital campus in September, followed by a launch party at Summerhall as part of the Scottish Mental Health Arts and Film Festival (SMHAFF). Some of the contributors read or performed their pieces, and it was wonderful to celebrate with them. You can read a review of the event here.

We were also part of the Out of Sight Out of Mind exhibition – again, part of SMHAFF – with artwork and photography from the project, and a screen showing the film, alongside a sound installation about mental health activism. I loved seeing all the work displayed with the space it deserved – and thanks to Pam van de Brug from CAPS, I learned a lot about putting an exhibition together.

It was a total privilege to work with all the contributors – I learned a huge amount from them and it was a gift to be trusted to bring their stories together.

The book and film are both available online.